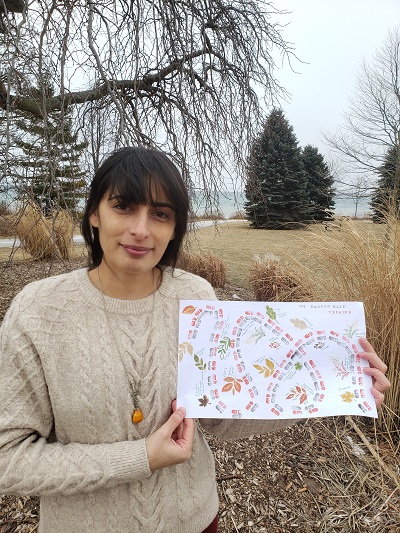 MNLCT’s LINC program was handpicked for a pilot project with the Department of Imaginary Affairs (DIA) to empower newcomers to learn English through their own personal and employment stories. This seven-week program, that is being facilitated by a team of MNLCT LINC instructors and two former LINC students, focuses on oral storytelling inspired by job interview questions.

This is the second collaboration between MNLCT and DIA on the Stories of Us project. Two years ago, MNLCT’s LINC and LIGHTS programs embraced this IRCC-funded initiative which hosted storytelling workshops for adult ESL learners to empower newcomers to learn English through their own personal immigration stories. The students had the option to write their story in their native language or in English, culminating in storybooks which were collected and stored in DIA’s English as a Second Language (ESL) library.

It has always been tough for me to tell my story, and these workshops are a help.

“We were the first LINC program to test DIA’s Stories of Us storytelling curriculum. This online library is primarily for LINC and ESL teachers across Canada to use, but anyone can and is encouraged to access the library,” explains Teresa Wiens, MNLCT’s head LINC teacher. “The basic concept is newcomers telling their own stories in a written format.”

But this time, the experience is purely oral storytelling and the theme is about employment. What makes this second initiative extra special is that two of Teresa’s former students – Vergine Tumanyan and Claire Yang – have been facilitating the program, alongside Teresa and a former ESL teacher, Kara Dawson.

“These workshops are teaching me more about the people that I studied with over the past two years. Some people are not talkative, and it is amazing to see how this workshop has allowed them to express themselves openly,” says Vergine.

The program consists of a one-day workshop each week over a total of seven weeks, where each workshop is based on one job interview question. Some of the main objectives of the employment storytelling curriculum are to help newcomers process the grief of unmet expectations and a changed life, while discovering storylines that motivate them. Ultimately, students are meant to believe and feel confident in the story they tell in employment settings.

One of the exercises is drawing a picture, a nature walk that maps out a student’s past education and employment journey. “Regardless if their careers turned out successful, each path is different. There is no right or wrong. There are obstacles and triumphs. These reflection exercises ultimately inspire students to talk about themselves,” explains Teresa.

Former student Claire is reaping the benefits of learning about herself while facilitating the class. “I am still learning, yet I also want to inspire others. This workshop is a great opportunity. It has always been tough for me to tell my story, and these workshops are a help,” she says.

Teresa emphasizes the significance of how the Stories of Us books are carefully designed to reflect the newcomer writer’s native language alongside English. ”The symbolic reason for this is to honour and respect each newcomer and the rich history and culture they bring with them to Canada,” she says.

The DIA’s online ESL library is not only intended for ESL teachers, but also for newcomers and Canadian citizens to access. The DIA states on its website that one of the objectives is to “empower newcomers by giving them a platform to share their stories and feel that they have a voice as a citizen of Canada”. It also clearly defines the importance of this project in educating Canadians about the journey of newcomers to Canada through their personal accounts.

Back To Top
Our services will not be running from Friday, July 1 to Monday, July 4. We will resume again on Tuesday, July 5. Happy Canada Day!