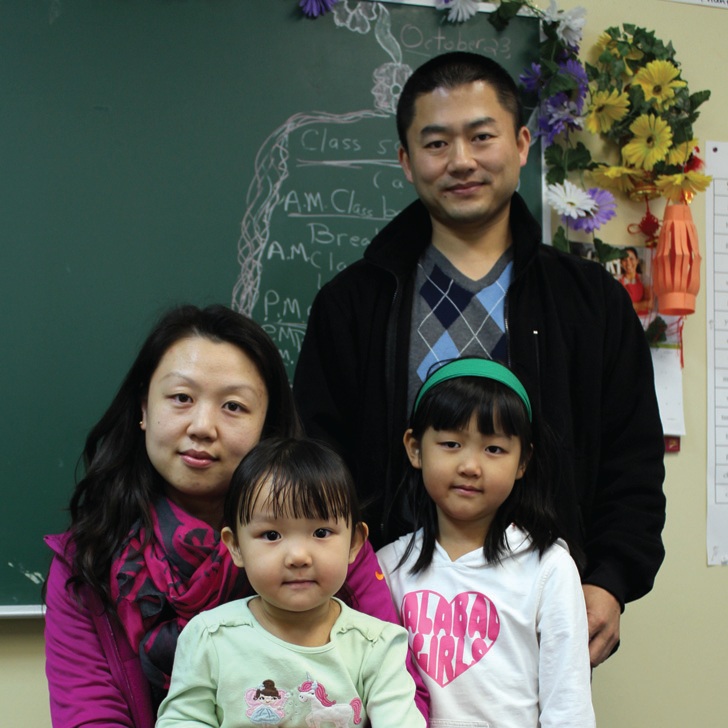 “The Mennonite New Life Centre is like a second home for our family,” says Lei Li who came from China in 2007 with his wife Bing Wang and their four-month-old daughter.

Since the family came to Toronto, the Centre has offered them help at almost every step of their Canadian life – language instructions, child care, counseling, applications for financial support, advice on continuing education, filling out forms for Canadian citizenship, applications for US visas and even assistance on solving complicated housing issues.

Before moving to Canada, Bing and Lei had almost no knowledge of English. “For many Chinese who come to Canada language is a big problem,” Bing explains. That is why she enrolled in the LINC Program (Language Instructions for Newcomers in Canada) at the Mennonite New Life Centre and studied full time from Level 1 to Level 4.

While she was in class, the Centre provided accessible childminding services for her daughters. Bing and Lei had their second daughter in Canada. With the help of the Centre, they applied for child tax benefit and received child care subsidy from the City of Toronto.

“If we were in China, we wouldn’t be able to afford a second child,” Bing says.

“But here we can – because the government helps the children.” During first few months in Canada, Lei attended a course in welding and easily found a job in this field. However, 10 months later he lost the job.

When he went to the Mennonite New Life Centre, a counselor helped him apply for employment insurance and also explained to him the benefits of continuing education. Lei decided to enroll in a computer networking program at Centennial College and since the family had no money for tuition fees, the settlement counselor helped Lei apply for Second Career – a government funded program that pays tuition and other expenses to laid-off unemployed workers. And because the money from Second Career was not enough, the Centre also assisted Lei in applying to OSAP (Ontario Student Assistance Program) to support study related costs.

Starting to believe that dreams can come true in Canada, Lei decided to pursue the career he always wanted but never had the chance to pursue before.

With the guidance of the Centre and help from OSAP, he became a fulltime student in the two-year Aviation Technician – Avionics Maintenance program at Centennial College.

When he graduates, he is hoping to become an aircraft maintenance technician. To gain as much knowledge and experience as possible, in the evenings, he has a part-time job at Pearson International Airport.

Still, in their everyday lives, Bing and Lei sometimes encounter problems they cannot solve – but they know that there is always someone at the Mennonite New Life Centre they can consult.

For example, when the family moved to a new house, they found out that two different water heater companies were charging them at the same time for the same service. Lei sent many emails to both companies and argued that he shouldn’t pay twice for the same thing, but the bills continued coming. So he turned to a counselor at Mennonite New Life Centre , who called the companies several times until she figured out what the problem really was. After a lengthy negotiation between the two companies and thanks to the involvement of the counselor, Bing and Lei were able to receive a fair settlement from the company that had wrongly charged them.

“If it wasn’t for this Centre, our life in Canada would be extremely difficult,” Lei says.“The Centre has always helped me and has helped so many other people,” says Bing, “and I want somehow to give back.”

So she became a volunteer in support of the activities the Mennonite New Life Centre organizes for newcomer senior residents in Toronto. “They needed someone who could speak both Mandarin and English,” she explains, “and also someone who would buy fruit and cookies and pass the handouts during the events, and give participants the texts of the songs they like to sing. So I decided to volunteer – because I felt that if I could make other people happier, I would become happier too.”